AMSAT’s preparations for the launch of RadFxSat (Fox-1B) on November 10th continue at a breakneck pace. FoxTelem developer Chris Thompson, G0KLA/AC2CZ, today announced the release of FoxTelem v1.05 on the AMSAT-BB. Among other improvements, upgrading to this release is required for the proper decoding of RadFxSat telemetry. FoxTelem versions for Windows, Mac, and Linux can be downloaded at https://www.amsat.org/foxtelem-software-for-windows-mac-linux/ 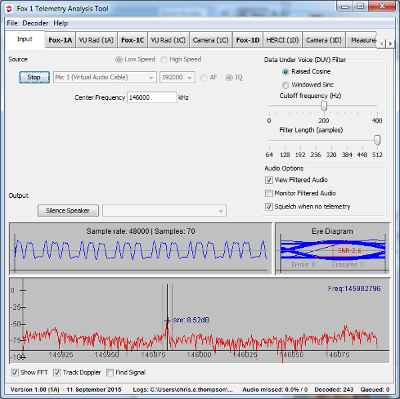 Below is the full text of Thompson’s post on the AMSAT-BB:

Accurately decode the data, display the results of the experiments and forward it to the AMSAT server for analysis by the experiment owners and other amateur scientists like yourself.  This version will also be able to download the RadFxSat data from the server.

You can use a new feature to calculate the position of the satellite. This is  enabled on the settings screen. The TLEs are automatically downloaded each
week and stored in EPOCH order.  This will be used to plot historical graphs in the future.  See the manual for more details.

You can set FoxTelem to only decode when the satellite is up.  This is designed to save CPU power when many copies of FoxTelem are run at the same time.

You can run FoxTelem in a new way.  If you pass a directory on the command line then it will use this as the location of the config file and the
log files. Previously you needed to create a batch file and run a special command. That will still work, but this should be easier.  See the manual for details.

* Implements changes needed to support RadFxSat (Fox-1B) which launches Nov 2017
* Simpler approach to run multiple copies of FoxTelem with different configuration settings
* Calculation of spacecraft position for users on Linux/Mac or those without SatPC32, including automatic TLE/KEP management
* Automatic start/stop of the decoder to save CPU when running many copies, based on FoxTelem calculation or SatPC32
* Runs on the Raspberry Pi 3
* Storage of the spacecraft .dat files in the logfiles directory to avoid issues where the install directory is not writable
* Plots 450 deg and 180 deg Az/EL correctly
* PSK decoder in readiness for RadFxSat-2 (Fox-1E)

You can email me with any bug reports or issues that you see.