The Air Force Academy satellite FalconSAT-3 is now open for amateur radio use as a digital store-and-forward system. FalconSAT-3 was built in 2005 and 2006 by cadets and faculty in the Space Systems Research Center at the US Air Force Academy in Colorado Springs, CO, and launched in 2007 on an Atlas V.

After serving in scientific and training roles, the Academy has now made the satellite available for Amateur radio use. 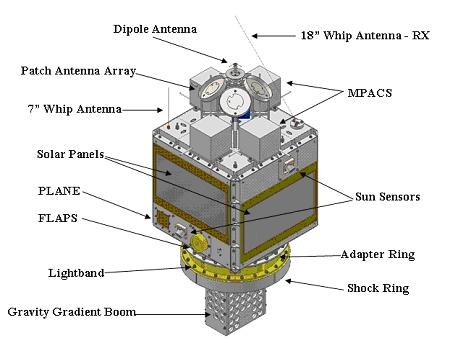 The satellite is in a 35.4 degree inclination orbit, with an approximate altitude of 465 to 476 km. The Packet Bulletin Board System is operating at 9600 baud with a 145.840 uplink, and 435.103 downlink. Output power is 1 watt, and the downlink is continuously on. Digipeating is enabled for live QSOs, but unattended digipeating operations is not authorized at this time. Current Keplerian elements can be found in the AMSAT distributed Keplerian elements.

More information can be found at https://www.amsat.org/falconsat-3/ and further operational inquiries should be directed to AMSAT Vice President Operations, Drew Glasbrenner, KO4MA (ko4ma@amsat.org).

[ANS thanks AMSAT Vice President Operations, Drew Glasbrenner, KO4MA for the above information]