Right on schedule at 03:59 UTC on January 12, 2018, the solid-fueled first stage and ground-lit strap on boosters of the Indian Space Research Organisation (ISRO)’s Polar Satellite Launch Vehicle in its XL configuration (PSLV-XL) ignited and hurtled AMSAT’s Fox-1D CubeSat along with 30 other satellites onboard the PSLV-C40 mission towards a sun-synchronous orbit. The events along the path to orbit happened rapidly. 30 seconds into the flight, the air lit strap on boosters were lit. One minute into the flight, the ground lit strap on boosters separated. Two minutes into flight, first stage separation and second stage ignition were confirmed. Now came a crucial moment. On August 31, 2017, the PSLV-C39 mission was doomed when its payload fairing failed to separate leaving the payload trapped inside the fairing and in a lower than planned orbit. Two minutes and thirty seconds into the flight, the call was heard on the ISRO webstream of the launch: “Payload fairing separation!” The cheers in mission control were audible as the liquid-fueled second stage continued to propel the payloads to orbit. Four minutes into the flight, the second stage separated and the solid-fueled third stage was lit to perform its duty. Seven minutes in, the third stage burned out. After a short coast period, the third stage was discarded and the liquid-fueled fourth stage ignited eight minutes and thirty seconds into the flight. Sixteen minutes and thirty seconds into the flight, the fourth stage shut down, having placed the vehicle into its initial orbit. A minute later, the primary payload, a Cartosat-2 series imaging satellite for the Indian government separated followed by other satellites on the mission. Twenty-seven minutes into the flight, confirmation came that all of the nanosatellites had been deployed. Fox-1D was in orbit!

Just before 05:00 UTC, Fox-1D passed over western North America, but the onboard timer that ensures the satellite is clear of the launch vehicle and other satellites on the mission before deploying antennas and transmitting had not yet expired. The AMSAT Engineering team would have to wait a bit longer before confirming the health of the satellite. At about 05:17 UTC, the satellite came to life and its antennas deployed over the North Pole. The AMSAT Engineering team and amateur radio operators worldwide were watching various WebSDRs waiting for signs of life. Around 05:25 UTC, the characteristic “Fox tail” of the Fox-1 FM transmitter was seen on multiple WebSDRs. Fox-1D was alive! While the satellite was alive and transmitting, the reception of telemetry frames was crucial for AMSAT Engineering to determine whether or not the satellite was healthy. At 05:28 UTC, the first frame appeared on the AMSAT telemetry server, uploaded by Anatoly Alexsandrov, UA9UIZ, of Tyazhinskyi, Kemerovo Oblast, Russia. Initial telemetry values confirmed that the satellite was healthy.

Satellites that achieve orbit and are successfully activated are commonly given an on-orbit name. Ever since the launch of OSCAR I in 1961, it has been traditional for amateur radio satellites to carry the name OSCAR, for “Orbiting Satellite Carrying Amateur Radio.” Amateur radio satellites meeting certain criteria are renamed “OSCAR” with a prefix of the satellite owner’s preference and issued a sequential number after they successfully achieve orbit and are activated. After confirmation of signal reception, OSCAR Number Administrator Bill Tynan, W3XO, sent an email to the AMSAT Board of Directors designating the satellite AMSAT-OSCAR 92. Tynan’s email read:

Fox-1D was launched successfully at 03:59 UTC today, January 12, 2018, from Satish Dhawan Space Centre in Sriharikota, India, and has been received by several amateur stations.

Fox-1D, a 1U CubeSat, is the third of AMSAT’s five Fox-1 CubeSats to reach orbit, being preceded by AO-85 (Fox-1A) and AO-91 (RadFxSat / Fox-1B). Fox-1D carries the Fox-1 U/v FM transponder, with an uplink of 435.350 MHz (67.0 Hz CTCSS) and a downlink of 145.880 MHz. In addition, Fox-1D carries several university experiments, including a MEMS gyro from Pennsylvania State University – Erie, a camera from Virginia Tech, and the University of Iowa’s HERCI (High Energy Radiation CubeSat Instrument) radiation mapping experiment. Fox-1D also carries the AMSAT L-Band Downshifter experiment which enables the FM transponder to be switched to utilize an uplink of 1267.350 MHz (67.0 Hz CTCSS).

Fox-1D was sent aloft as a secondary payload on the Indian Space Research Organisation (ISRO)’s PSLV-XL rocket as part of the PSLV-C40 mission. Fox-1D was one of thirty-one satellites successfully deployed on this launch.

Since Fox-1D has met all of the qualifications necessary to receive an OSCAR number, I, by the authority vested in me by the AMSAT President, do hereby confer on this satellite the designation AMSAT-OSCAR 92 or AO-92. I join amateur radio operators in the U.S. and around the world in wishing AO-92 a long and successful life in both its amateur and scientific missions.

I, along with the rest of the amateur community, congratulate all of the volunteers who worked so diligently to construct, test and prepare for launch the newest amateur radio satellite. 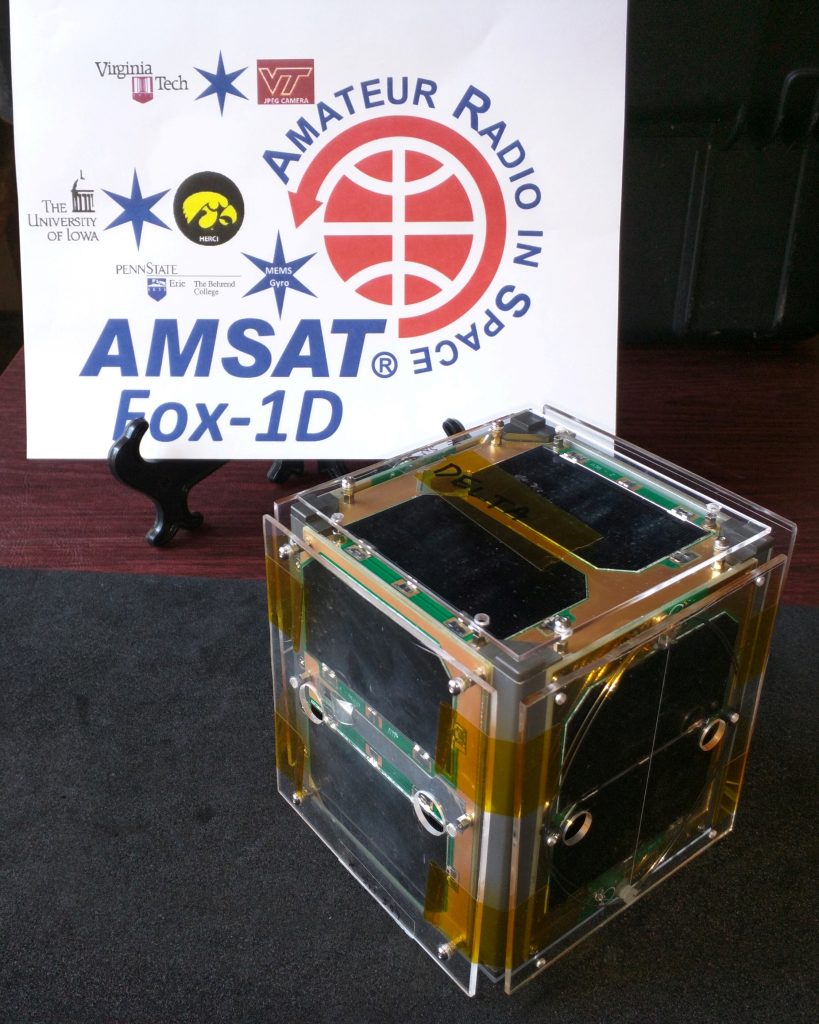