The next AMSAT Fox-1 satellite, Fox-1Cliff, is scheduled to launch on Spaceflight’s SSO-A mission on a SpaceX Falcon 9 from Vandenberg Air Force Base.

As part of the preparations for the launch of Fox-1Cliff, AMSAT is making the “Getting Started With Amateur Satellites” book available for a limited time as a download with any paid new or renewal membership purchased via the AMSAT Store. This offer is only available with purchases completed online, and for only a limited time. A perennial favorite, Getting Started is updated every year with the latest amateur satellite information, and is the premier primer of satellite operation. The 186 page book is presented in PDF format, in full color, and covers all aspects of making your first contacts on a ham radio satellite.

Please take advantage of this offer today by visiting the AMSAT store at https://www.amsat.org/shop/ and selecting any membership option. While there, check out AMSAT’s other items, including the M2 LEOpack antenna system, Arrow antennas, AMSAT shirts, and other swag. Be sure to view your cart before going to checkout. If you add a membership and then go directly to checkout, you’ll never see an option to add your free gift.

Fox-1Cliff carries the flight spare of the AO-85 Vanderbilt University Low Energy Proton (LEP) radiation experiment, and the standard Fox-1 Penn State University–Erie gyroscope experiment. Virginia Tech provided a VGA camera which is the same as AO-92 but will provide images at a higher 640 x 480 resolution. These non-SSTV images will be decoded in the FoxTelem software.

Fox-1Cliff, unlike the other three Fox-1 FM spacecraft, does not have an active AFC (Automatic Frequency Control) on the uplinks.

Fox-1Cliff’s Data Under Voice (low-speed telemetry) will be the same as for AO-85, AO-91, and AO-92. It will be supported by the same FoxTelem software already released.

As with AO-92, a high-speed mode will be used to support the Virginia Tech VGA camera experiment. This mode will be active for 40 minutes by ground command before reverting to standard U/v repeater voice operation.

Fox-1Cliff is named in honor of long-time AMSAT member, contributor, and benefactor Cliff Buttschardt, K7RR (SK), who passed away in 2006. Cliff’s contributions to AMSAT and other amateur satellite programs, including serving as an adviser during the initial development of the CubeSat specification at California Polytechnic State University, earned him the Lifetime Achievement Award from Project OSCAR in 2006. 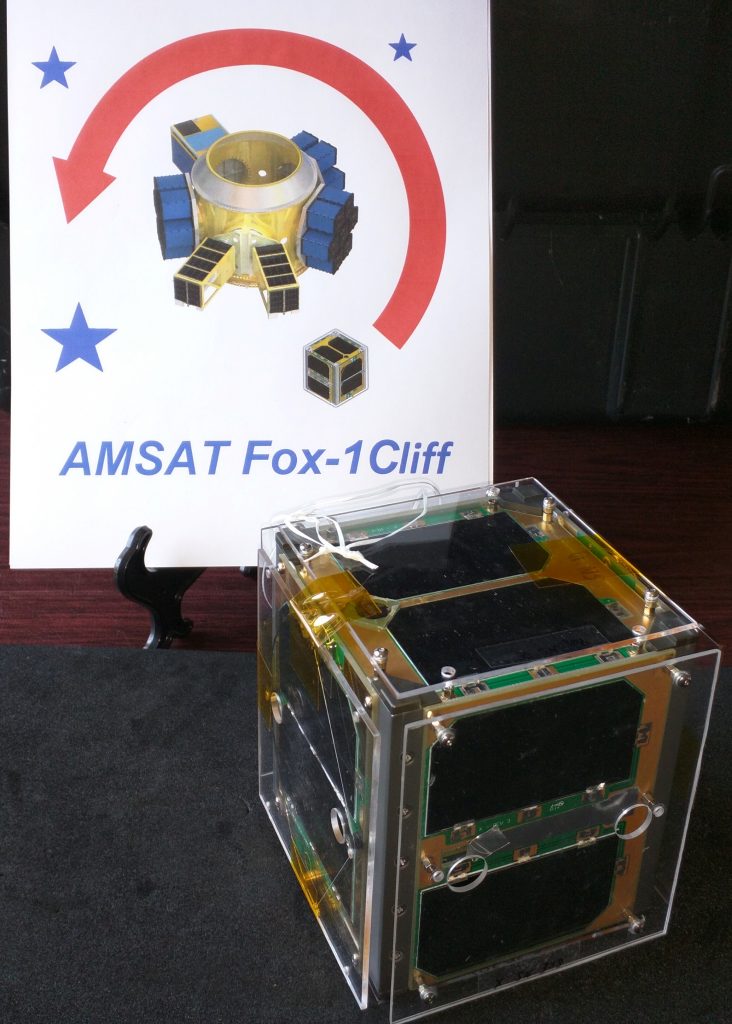