The May/June 2017 issue of The AMSAT Journal has been sent to the printer and should begin arriving in members’ mailboxes shortly.

The RadFxSat (Fox-1B) Mission Readiness Review was held Saturday morning, April 29th, at the Cal Poly campus in front of a board representing Tyvak, Cal Poly, and NASA.
The purpose of the review is to verify that all requirements are met for a safe and successful launch and deployment. Vice President Engineering Jerry Buxton, N0JY, presented 81 PowerPoint slides covering all of the ICD (Interface Control Document) requirements, mission, operations, and deorbit.
At the conclusion of the presentation including questions answers, the panel unanimously approved RadFxSat as ready for flight. The next milestone will be integration into the P-POD with launch scheduled NET (No Earlier Than) September 23, 2017 aboard a Delta II at Vandenberg AFB.

The March/April 2017 issue of The AMSAT Journal has been sent to the printer and should begin arriving in members’ mailboxes shortly. 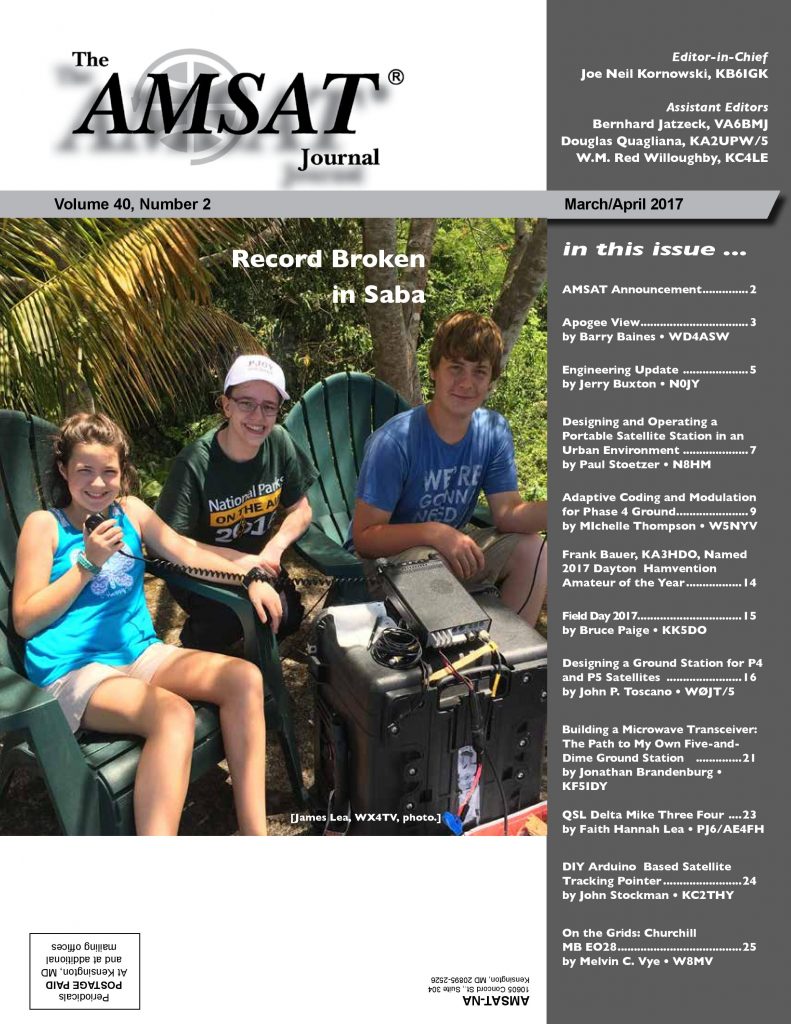 The launches of AMSAT satellites Fox-1Cliff and Fox-1D have been rebooked from the original Spaceflight Formosat-5/Sherpa mission aboard a SpaceX Falcon 9  on to two separate new launches.

Fox-1D will now ride to orbit on an Indian PSLV vehicle scheduled to launch from Satish Dhawan Space Centre in Sriharikota, India in late 2017.

Fox-1Cliff will launch on Spaceflight’s SSO-A dedicated rideshare mission aboard a SpaceX Falcon 9 scheduled to launch from Vandenberg Air Force Base in California in late 2017 or early 2018.

These moves will serve to expedite the launch of these two satellites, both of which carry an amateur radio U/v FM repeater and an experimental L/v FM repeater.  The satellites also carry scientific experiments, from university partners Penn State, Vanderbilt University ISDE, Virginia Tech, and University of Iowa.

In addition to the launch of Fox-1Cliff and Fox-1D, AMSAT is awaiting the launches of RadFxSat and RadFxSat-2. RadFxSat is currently manifested for launch on August 29, 2017 aboard the ELaNa XIV mission, as a secondary payload with the Joint Polar Satellite System (JPSS)-1 on a Delta II from Vandenberg Air Force Base, California. RadFxSat-2 will be launched by Virgin Galactic on their LauncherOne air launch system from Mojave, CA on the ELaNa XX mission no earlier than December 2017.