The AMSAT News Service bulletins are a free, weekly news and information service of AMSAT, The Radio Amateur Satellite Corporation. ANS publishes news related to Amateur Radio in space including reports on the activities of a worldwide group of Amateur Radio operators who share an active interest in designing, building, launching and communicating through analog and digital Amateur Radio satellites.

The news feed on https://amsat.org publishes news of Amateur Radio in space as soon as our volunteers can post it. Please send any amateur satellite news or reports to: ans-editor at amsat dot org.  You can sign up for free e-mail delivery of the AMSAT News Service Bulletins via the ANS List; to join this list see:  https://www.amsat.org/mailman/listinfo/ans

On December 6, 2019, the Technical University of Budapest SMOG-P and ATL-1 PocketQubes were launched on an Electron launch vehicle from the Mahia Launch Complex in New Zealand. SMOG-P and ATL-1 were developed as part of the university curriculum and operated in cooperation with the HA5MRC Technical University amateur radio club. The satellites carry spectrum monitoring payloads and are currently active.

At the request of the Technical University of Budapest, AMSAT hereby designates SMOG-P as Magyar-OSCAR 105 (MO-105), and ATL-1 as Magyar-OSCAR 106 (MO-106). AMSAT congratulates the owners and operators, thank them for their contribution to the amateur satellite community, and wish them a long mission and continued success on this and future projects.

CAMSAT’s amateur radio payload CAS-6 piggybacked on a technology test satellite TIANQIN-1 was successfully launched on December 20, 2019 at the Taiyuan Satellite Launch Center of China using a CZ-4B launch vehicle. The primary payload of this launch is China-Brazil Earth Resources Satellite CBERS-4A. Specifications for the satellite are as follows:

The satellite is currently in orbit testing, the amateur radio payload is expected to be operational in about three days.

[ANS thanks Alan Kung, BA1DU for the above information.]

Need new satellite antennas? Purchase Arrows, Alaskan Arrows, and M2 LEO-Packs
from the AMSAT Store. When you purchase through AMSAT, a portion of the proceeds
goes towards Keeping Amateur Radio in Space.
https://amsat.org/product-category/hardware/

At its December 12 meeting, the FCC formally adopted a Notice of Proposed Rulemaking (NPRM) in WT Docket 19-348 and invited comments on its plan to remove “existing non-federal secondary radiolocation and amateur allocations” in the 3.3 – 3.55 GHz band and relocate incumbent non-federal operations. The FCC said it’s seeking comment on appropriate “transition mechanisms” to make that happen. ARRL has indicated that it will file comments in opposition to the proposal. The amateur 9-meter allocation is 3.3 – 3.5 GHz. The NPRM comes in response to the MOBILE NOW [Making Opportunities for Broadband Investment and Limiting Excessive and Needless Obstacles to Wireless] Act, approved by the 115th Congress to make available new spectrum for mobile and fixed wireless broadband use.

“By proposing to delete the existing non-federal secondary allocations from the 3.3 – 3.55 GHz band, we are taking an important initial step towards satisfying Congress’s directives and making as
much as 250 megahertz of spectrum potentially available for advanced wireless services, including 5G,” the FCC said in the Introduction to its NPRM.

The FCC said it is seeking comment on relocating non-federal licensees to another band. With respect to amateur operations, the FCC invited comments on whether sufficient amateur spectrum exists in other bands that can support the operations currently conducted at 3.3 – 3.5 GHz. The 3.40 – 3.41 GHz segment is earmarked for amateur satellite communication. “We seek comment on the extent to which the band is used for this purpose, whether existing satellites can operate on other amateur satellite bands, and on an appropriate timeframe for terminating these operations in this band,” the FCC said. If non-federal licensees are relocated to 3.1 – 3.3 GHz band, the FCC proposes that they continue to operate on a secondary basis to federal operations, consistent with current band allocations.

Some comments began to arrive before the FCC formally adopted the NPRM, as it points out in a footnote. Kevin Milner, KD0MA, the secretary/treasurer of the Ski Country Amateur Radio Club in Colorado, has argued that the club’s equipment cannot be re-channeled below 3.4 GHz, and the club is seeking relocation costs. Devin Ulibarri, W7ND, told the FCC that amateur networks in the current band cannot move easily into other amateur allocations because there is no readily available commercial equipment to support the bandwidth, the FCC recounted.

In the event the proposed amendments are adopted, the FCC “seeks comment on relocation options and on transition and protection mechanisms for incumbent non-federal operations.”

[ANS thanks the ARRL for the above information.]

Also at its December 12 meeting, the FCC considered another NPRM in WT Docket 19-138 that would “take a fresh and comprehensive look” at the rules for the 5.9 GHz band and propose, among other things, to make the lower 45 MHz of the band available for unlicensed operations and to permit “cellular vehicle-to-everything” (C-V2X) operations in the upper 20 MHz of the band. The FCC is not proposing to delete or otherwise amend the amateur allocation, which would continue as a secondary allocation.

The Amateur Radio Emergency Data Network (AREDN) has offered its voice in challenging the FCC proposals on the two bands, saying their adoption would “eliminate our use of the most-effective resource hams have to build its networks.”

“The AREDN Project is able to leverage low-cost commercial devices solely because they are designed to operate on adjacent allocations, AREDN said on its website. “Moving to other allocations would be difficult if not impossible without a complete redesign, manufacture, purchase, and installation of new custom amateur hardware and software…, raising the price out of reach for the typical ham.”

Interested parties may file short comments on WT Docket 19-348 via the FCC’s Electronic Comment Filing Service (Express). Visit the FCC “How to Comment on FCC Proceedings” page for information on filing extended comments.

[ANS thanks the ARRL for the above information.]

The following Amateur Radio satellites have been added to this week’s TLE distribution:

Note:
1. Duchifat 3 is being used as the TLE name. Duchifat 3 is the name used by the students who built it, per the university website.
2. TRSI-Sat is not transmitting at the present time. TLEs will be provided until it is determined that it has failed.

[ANS thanks AMSAT Orbital Elements Manager Ray Hoad, WA5QGD, for the above information.]

The AztechSat-1 CubeSat, which traveled to the International Space Station (ISS) last weekend on the 19th Space-X Commercial Resupply Services (CRS-19) mission for NASA, will listen for emergency messages in the 439 MHz range and retransmit them for amateur radio operators to copy on the 437.300 MHz downlink using the Winlink protocol, once the CubeSat has been placed into orbit. The satellite is a project of Mexico’s Universidad Popular Autónoma del Estado de Puebla (UPAEP). Aztechsat-1 is set for deployment from the International Space Station in late January.

“The primary objective of the project is to establish communication with the commercial GlobalStar satellites in order to improve data transmission to Earth,” a UPAEP news release said.  AztechSat-1 will create a saturation map of 435 – 438 MHz by listening for the whole orbit and returning captured data to the ground station on the 437.300 MHz amateur radio downlink (9k6 GMSK or FSK) plus a 1600-MHz Global-Star link. Emergency messages received via Globalstar to the AztechSat-1 ground station will be shared on the project’s website. A certificate will be available for amateur stations receiving the emergency message(s) and reporting these for confirmation by the AztechSat-1 team.

Details are on the AztechSat-1 website and on the IARU Amateur Radio  Satellite Communication page.

NASA explained, “The investigation demonstrates communication within a satellite network in low-Earth orbit. Such intra-satellite communication could reduce the need for ground stations, lowering the cost and increasing the number of data downloads possible for satellite applications.”

[ANS thanks ARRL for the above information.]

You are cordially invited to take part in AMSAT CW Activity Day 2020 sponsored by AMSAT for all radio amateurs throughout the world. The 2020 event will be held in memory of Larry Brown, W7LB, and Keith Pugh, W5IU. Among their many contributions to AMSAT, they were the AMSAT 20-meter net for many years.

Participation is easy. Just operate CW through any Amateur Radio satellite on 1 January 2020. Use of straight keys or bugs is encouraged but not required. If you use AO-7, please observe the QRP rules currently in effect for that 45-year-old satellite. May it be with us for many years to come!

[ANS thanks Raphael Soifer, W2RS, AMSAT Senior Advisor for the above information.] 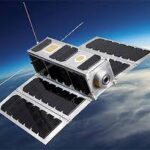 On December 18 2019 ESA launched a first-of-its-kind space laboratory, OPS-SAT. The satellite lifted off from Europe’s Spaceport in Kourou, French Guiana aboard a Soyuz-Fregat rocket. The small, low-cost, test satellite has been specifically designed for operational experimentation in space, and includes the most powerful flight computer on-board any current ESA spacecraft.

Consumer electronics have gone through a revolution over the last 30 years with computers becoming ever faster, smaller and better. But when it comes to million- or even billion-euro satellites, their on-board hardware and software have not seen this revolution due to the risk of testing new technology in flight.

As spacecraft managers dare to fly only tried-and-tested hard and software in the harsh conditions of space, innovation on the operational side of satellites is a very slow-moving process. This is where OPS-SAT steps in, bringing down the barriers to spacecraft operations it provides a chance to safely test out new mission control techniques.

Anyone can apply to become an ‘experimenter’ and test their innovative software and new mission operations techniques in space. OP-SAT provides technology for future missions and paves the way for satellites to further evolve with minimum risk. Complete information is available at https://tinyurl.com/ANS-356-OPS-SAT.

[ANS thanks the European Space Agency for the above information.]

On Tuesday 10-Dec at 5AM in the Port of Mar del Plata, Argentina, an AMSAT-LU team started the Buoy NEMO-1 operation.

Communications were made thru the ‘Repelata’ (RepeCan), an effective FM VU repeater made by LU9ATJ, that was raised at 450m height by a captive balloon on the coast.

Later, a ship maneuver, hit the buoy damaging one of the solar panels. The AMSAT team, helped by ship personnel, recovered the buoy and boarded it on board. After checking the damage, it was decided to abort the mission. NEMO-1 returned home and is in Buenos Aires for repairs, spare parts and reinforcements. Conversations have already been established in Mar del Plata to, once the work is finished, repeat and conclude this adventure.

AMSAT thanks the ‘NEMO Group’, the more than 119 people who helped realize this dream http://amsat.org.ar/certboyae.htm and the Menendez Beety family, who selflessly facilitated accommodation in their house in Mar del Plata.

[ANS thanks AMSAT-LU for the above information.]

Purchase AMSAT Gear on our Zazzle storefront.
25% of the purchase price of each product goes
towards Keeping Amateur Radio in Space
https://www.zazzle.com/amsat_gear

Please submit any additions or corrections to ke4al (at) amsat.org

[ANS thanks Robert Bankston, KE4AL for the above information.]

No school contacts will be scheduled until 2020.

[ANS thanks Charlie Sufana, AJ9N for the above information.]

AMSAT, along with our ARISS partners, is developing an amateur radio package,
including two-way communication capability, to be carried on-board Gateway in
lunar orbit. Support AMSAT’s projects today at https://www.amsat.org/donate/

Shorts from All Over