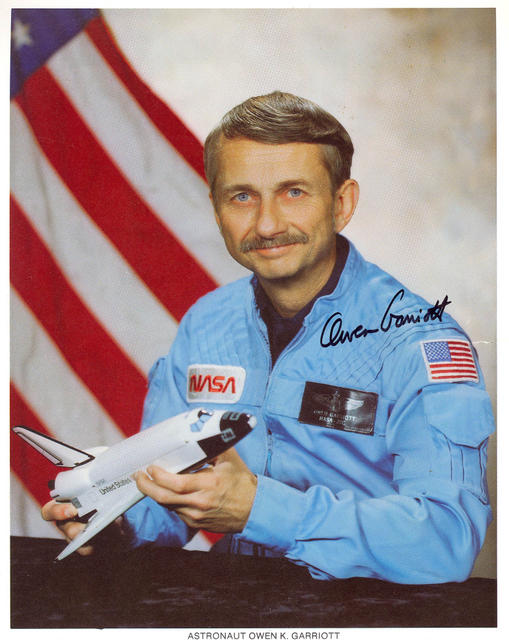 EDUCATION: Graduated from Enid High School in 1948; received a B.S. in Electrical Engineering from the University of Oklahoma in 1953 and a M.S. and Ph.D from Stanford University in Electrical Engineering in 1957 and 1960, respectively. Completed one year U.S. Air Force Pilot Training Program (1966), receiving qualification as pilot in jet aircraft.

EXPERIENCE: Served as electronics officer on active duty in the U.S. Navy from 1953 to 1956. From 1961 through 1965 he was an Assistant Professor, then Associate Professor in the Department of Electrical Engineering at Stanford University. He performed research and led graduate studies in ionospheric physics after obtaining his doctorate and authored or co-authored more than 45 scientific papers, chapters and one book, principally in areas of the physical sciences.

In 1965 he was one of the first six Scientist-Astronauts selected by NASA. His first space flight aboard Skylab in 1973 set a new world record for duration of approximately 60 days, more than double the previous record. Extensive experimental studies of our sun, of earth resources and in various life sciences relating to human adaptation to weightlessness were made.

His second space flight was aboard Spacelab-1 in 1983, a multidisciplinary and international mission of 10 days. Over 70 separate experiments in six different disciplines were conducted, primarily to demonstrate the suitability of Spacelab for research in all these areas. He operated the world’s first Amateur Radio Station from space, W5LFL, which has since expanded into an important activity on dozens of Shuttle flights, Space Station MIR and now the International Space Station, with scores of astronauts and cosmonauts participating.

Between these missions, he received a NASA fellowship for one year’s study at Stanford (1975-76) and held the posts of Deputy, Acting and Director of Science and Applications at Johnson Space Center, (1974-75, 76-78). In the latter post he was responsible for all research in the physical sciences at the Johnson Space Center. From 1984 to 1986, he held the position of Project Scientist in the Space Station Project Office. In this position he worked closely with the external scientific communities and advised the Project Manager concerning the scientific suitability of the Space Station design.

After leaving NASA in June, 1986, he consulted for various aerospace companies and served as a member of several NASA and National Research Council Committees.

From January 1988 until May 1993, he was Vice President of Space Programs at Teledyne Brown Engineering. This Division, which grew to over 1,000 people, provided payload integration for all Spacelab projects at the Marshall Space Flight Center and had a substantial role in the development of the U.S. Laboratory for the International Space Station.

He has devoted additional time to several charitable activities in his home town, including the Enid (OK) Arts and Sciences Foundation of which he was a co-Founder in 1992. More recently, he has accepted a position as Adjunct Professor in the Laboratory for Structural Biology at the University of Alabama in Huntsville (UAH) and has participated in research activities there involving new microbes he has returned from extreme environments such as very alkaline lakes and deep sea hydrothermal vents. Hyperthermophiles were returned from several dives in Russian MIR submersibles to the Rainbow Vents at a depth of 2,300 meters near the Azores in the Atlantic Ocean. Other research activities included three trips to Antarctica from which 20 meteorites were returned for laboratory study.