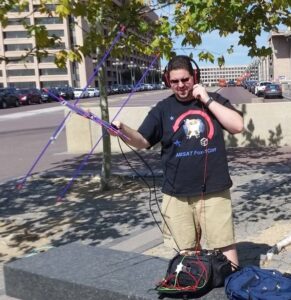 I am pleased to be writing this edition of “Apogee View” in Joe’s place as a special guest columnist. For those of you who don’t know me, I am somewhat new to amateur radio satellites and AMSAT. My first experience with amateur satellites was listening to the ARISSat-1 voice beacon and decoding its SSTV images in August 2011. In September 2012, I made my first satellite QSOs (on AO-27) and joined AMSAT. In 2015, I was elected Secretary by the AMSAT Board of Directors; and, in 2017, I was elected Executive Vice President. I also have served as both an alternate and a regular member of the board.

As I write this in late September, getting ready for the upcoming Symposium, summer refuses to yield to the cooler air of fall here in Washington, D.C. I hope the weather will be more comfortable for the Symposium in nearby Arlington, VA, in a few weeks.

In mid-September, we received the fantastic news that Amateur Radio Digital Communications (ARDC) awarded a very generous grant to ARISS for the InterOperable Radio System (IORS) and related infrastructure. ARDC is the owner and manager of the Internet network known as the AMPRNet. In June 2019, ARDC initiated a philanthropic endeavor to provide monetary grants to organizations, groups, projects, and scholarships which have significant potential to advance the state of the art of Amateur Radio and digital communications in general. While ARISS still needs additional donations to fund the IORS fully, this grant significantly helps the endeavor. ARISS plans to have the IORS ready for launch by the end of the year. AMSAT thanks ARDC for their substantial contribution to this effort.

ARISS is a key component of AMSAT’s vision. As printed inside the front cover of each issue of The AMSAT Journal, “Our Vision is to deploy satellite systems with the goal of providing wide-area and continuous coverage,” as we “continue active participation in human space missions and support a stream of LEO satellites developed in cooperation with the educational community and other amateur satellite groups.” AMSAT teams are hard at work on each clause of that vision statement.

The GOLF program is making good progress with development of the GOLF-TEE satellite. GOLF-TEE is a crucial element of our path back to high orbits and fulfilling the first clause of AMSAT’s vision to provide wide-area and continuous coverage satellite systems. Systems aboard GOLF-TEE include active attitude determination and control (ADAC), a radiation-tolerant internal housekeeping unit (RT-IHU), and a Fox-1E type VHF/UHF linear transponder. GOLF-TEE also will include a software defined radio (SDR) with a high-speed X band (10 GHz) data downlink which may also provide a simultaneous X band downlink of the V/u transponder passband, effectively providing V/x capability for use and evaluation. All of these technologies are crucial for missions to HEO and GEO, and additional information will appear in future issues of The AMSAT Journal.

Our participation in human space missions also is expanding. As announced at the AMSAT Forum at the Dayton Hamvention, international AMSAT and ARISS organizations have formed a group known as AREx (Amateur Radio Exploration). Work currently is underway on the design of a ham radio system for NASA’s Lunar Gateway. The Gateway will be a small spaceship in orbit around the Moon that will provide access to more of the lunar surface than ever before, with living quarters for astronauts, a lab for science and research, ports for visiting spacecraft, and more. The first sections of the Gateway are scheduled for launch in 2022. The plans call for various uses of L (1.2 GHz), S (2.4 GHz), C (5 GHz), and X (10 GHz) bands for repeater-type communications, both analog and digital, through Gateway, image transmissions from both inside and outside the Gateway, possible access to experiments aboard Gateway, and two-way communications with astronauts while Gateway is crewed. The challenges for amateurs involve the substantial increase in free space path loss compared to satellites in low earth orbit. We are very excited about AMSAT’s participation in this project. More details will be presented at the 2019 AMSAT Space Symposium and articles will certainly follow in future editions of The AMSAT Journal.

Finally, we continue to support a stream of LEO satellites. RadFxSat-2 / Fox-1E is ready for launch no earlier than December 1, 2019 on the ELaNa XX mission. That mission will launch on the first commercial flight of Virgin Orbit’s LauncherOne air launch to orbit system. Stay tuned to ANS for further updates on the launch date.

The linear transponder and telemetry system carried aboard Fox-1E was designed for use in different CubeSats by merely adding an interface adapter for connection to the host bus. Noting the prevalence of CubeSats built and launched by universities and other organizations, AMSAT adopted a goal of “amateur radio in every CubeSat.” Interested CubeSat programs wanting to fly an amateur radio payload may partner with AMSAT to carry one of these modules on their spacecraft. By providing amateur radio capability, the CubeSat program gets a worldwide ground station network to receive their telemetry and experiment data while the amateur radio community gets a transponder to use in orbit.

The first of these partnerships is with the Husky Satellite Lab at the University of Washington. Their 3U CubeSat, HuskySat-1, is scheduled to launch on the ELaNa XXV mission from Wallops Island, VA, no earlier than November 2. Northrup Grumman’s Cygnus spacecraft will carry HuskySat-1 on a mission to the International Space Station. After completing its mission at the ISS, Cygnus will continue to a higher orbit of approximately 500 km to deploy HuskySat-1. After a 30-day mission to complete tests of its experimental payloads, a pulsed plasma thruster, and a K band (24 GHz) communications system, the satellite will be turned over to AMSAT, and the linear transponder will be made available to the amateur radio community. In addition, AMSAT Vice President of Engineering, Jerry Buxton, N0JY, and Vice President of Operations, Drew Glasbrenner, KO4MA, have been hard at work identifying and working with several CubeSat groups interested in carrying this system. We hope to be able to make additional announcements soon.

The 2019 AMSAT Board of Directors election recently concluded. I congratulate the winners and look forward to working with the newly-elected board to further our vital mission to Keep Amateur Radio in Space. By the time this Journal arrives, the 2019 Board of Directors meeting and 50th Anniversary AMSAT Space Symposium will have concluded. It promises to be an exciting weekend exploring both AMSAT’s five-decade history and the work we are doing for the future.

While there will no doubt be many challenges in the future, I am confident in the organization’s ability to overcome them. We will Keep Amateur Radio in Space. I look forward to attending the AMSAT Centennial Symposium in the fall of 2069 at the age of 84. Hopefully, by then we will be discussing our plans for amateur radio on the first crewed interstellar mission.