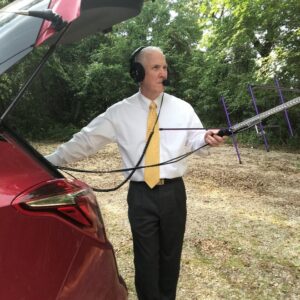 A Sustained FM Presence in LEO

While our volunteer engineers focus their efforts on GOLF, developing the systems and technologies necessary for our path upward to HEO, we must not forget our responsibility to promote amateur radio satellites and encourage the next generation of operators and builders.

Advancing the art and science is not enough.  We also need to provide an easy entry point to amateur radio satellite communications to support of our space education and outreach activities.

AMSAT’s Echo (AO-51) and Fox-1 (AO-85, AO-91, and AO-92) satellites, as well as SaudiSat-1C (SO-50) have been the most widely used amateur satellites.  What makes them so popular is their ability to provide basic radio communications, with very simple ground station equipment, and their ease of use.  An FM repeater, even in a low Earth orbit (LEO), allows amateur radio operators to communicate over substantial distances using just a handheld transceiver (an HT) and a small handheld directional antenna.  Cross-continental and, if you are lucky enough to live near the coast, transcontinental communications are possible.

These so called “EasySats” have provided countless hours of enjoyment to thousands and thousands of amateur radio satellite operators around the world, making QSOs, chasing grids, and even just a chance to send out a casual hello to an old friend.  More importantly, FM satellites are extremely valuable in providing an introduction to satellite communications and often used for demonstrations given at schools and public events.

With AO-85’s battery failure and AO-91 and AO-92 on borrowed time, AMSAT will soon find itself without an FM satellite in space.  The time to act is now.

AMSAT’s Strategic Plan, Objective 4.1, FM Operations gives us fairly specific guidance:  Develop, deploy, and support a series of 1u spacecraft to support continued FM amateur satellite operations in low Earth orbit.  As such, any proposal must include a sustained FM presence in LEO.

The Fox-1 CubeSat series taught us some valuable lessons.  First, batteries in in a 1U CubeSat are more likely to have a three-year life span, rather than the expected five years.  Keeping battery levels above the minimal voltage rating is critical.  The popularity of AMSAT’s FOX-1 series, especially at night, when the satellite was in eclipse, was the primary cause of their shortened battery life.  Any proposal must include both battery management and battery failsafe.  The design must include provisions that automatically switch the satellite to Low Power Mode (beacon and telemetry only), when the battery voltage drops to a cautionary level, and then automatically return to normal operations, when sufficient battery power is restored.  In addition, the satellite must be designed so that when the battery fails, the transponder can continue to operate when the satellite is in sunlight.  Similarly, the design should include an autonomous capability so that the FM repeater can operate without relying on ground control or a functioning processor in the command, control, and telemetry module. These safeguards and failsafes should extend the usable life of our satellites.

Second, it is impossible to keep a strict schedule, when relying on a “free ride” under NASA’s Educational Launch of Nanosatellites (ElaNa) initiative.  Once accepted into the program and manifested on a launch, you are at the mercy of the launch provider, and things don’t always go as scheduled.  Case in point, Fox-1D (AO-92) launched before Fox-1C (AO-95).  To ensure the launch of one satellite every three years, we will need to purchase launches.  In addition, we need to have a “flight spare” on standby in case there is an integration inspection issue with the primary satellite or a subsequent launch failure.

Every satellite project requires both people and funding.  As mentioned already, all of our engineers are consumed by our GOLF program.  This leaves us with either open-sourcing the project or purchasing a commercial, off-the-shelf satellite.  Open-sourcing would work for the initial design process; however, there is no current precedent to allow the open-source building of a satellite under U.S. Export Administration Regulations (EAR).

While there are many commercial companies that offer complete off-the-shelf 1U CubeSat platforms, only one includes an FM repeater that meets our mission requirements.  Purchasing a ready-to-fly CubeSat seems to be our best course of action, given AMSAT engineers’ focus on GOLF, but it comes at a cost.

Two 1U FM CubeSats (flight model and flight spare), a 1U FM CubeSat engineering model (without solar panels) and a 500 KM, Sun-synchronous orbit launch will cost just over $283,000.  Each additional launch, one every three years, will cost approximately $138,000, as we would only need to purchase one CubeSat and the launch.

So that leaves us with the big question – How are we going to pay for it?  An FM satellite provides a world-wide benefit.  Therefore, we need to conduct an international fundraising campaign, partner with other AMSAT organizations, and request funding from other organizations.

The benefits of providing a sustained FM presence in LEO to promote and support amateur radio in space far outweighs the costs, especially when we implement a plan that allows our AMSAT engineers to continue their efforts on our path Onward & Upward.

If approved by our Board of Directors, I hope you will support us.